It’s a new year! The festering turd that was 2018 has left the building to pave way for beautiful new opportunities.

Where have I been hiding I hear you (nobody) ask? Under a rock of some pretty mad depression, writer’s block and general apathy & laziness. “What? That’s crazy! You’re so together!”

The last half of 2018 I was able to start crawling out from underneath the rock and I think I’m pretty good to go back to being a functional human being again. While I didn’t actually achieve a lot in the sense of starting something and following it to completion, I did a lot of things.

The best thing I did was take the kid and the husbro on a month long holiday to New Zealand. We’ve never had a real family holiday before, which is totally tragic given she’s 7 (8 in 3 weeks!!). We tried camping once when she was about 2 or so, and it nearly ended in a divorce (ours) and a murder (the people over the way). It was 4 billion degrees, there were flies everywhere and the stupid fucking air mattress kept deflating. A bunch of loud douchecanoes showed up at dusk and promptly started drinking, swearing and blasting music which didn’t facilitate an easy sleep for the kid or us. She was kind of oblivious though and had a great time, she was happy she got to swim and play on the playground and sleep outside.  Husbro hates outside, camping and other people so there was a lot of attitude being flung about from him, and from me back at him for being a whiny little bitch. So, I was nervous about New Zealand, but I shouldn’t have been.

Cailee is an amazing little traveller. She eats anything, she doesn’t need to sleep and she has boundless energy. It is like travelling with an enthusiastic teenager – the ability to be curious about your surroundings, the desire to see and learn things coupled with general mouthiness and a heavy dose of screen addiction.

She learned to ski in about 3 seconds flat. She took one half day lesson and was up the mountain by herself for the rest of the time. We spent a week in Queenstown doing the skiing/adventure thing, a few days in Dunedin – mainly to see the chocolate factory which I only learned had closed after we got there (fail mum!). Then we went to the North Island and spent a few weeks in Wellington, Rotorua and Auckland doing a lot of sightseeing and Lord of the Rings Tours. I even made her watch The Fellowship of the Ring and she pointed out all the places that she had been. Much more awesome travelling with a kid that has an amazing memory.

She has decided that she’ll be moving to Auckland to study to be a Vet when she leaves school. Luckily, we have had some politicians get caught in citizenship dramas which allowed me to work out that it’s actually possible for her to do. Seriously, I looked up the NZ Government website to see how easy it is to determine if you are a NZ citizen or not. It’s 5-6 questions and it tells you at the end, it’s not rocket science. There’s no excuse for those shitheads not to know. Anyway, James is an NZ citizen, so Cailee’s got an an in.

The holiday got me to focus on something that wasn’t work for a change and really cleared my head. I didn’t realise how much I needed it.

I was a finalist in a competition to win a scholarship to complete a Masters of Business Administration. I didn’t really stand a chance of actually winning it, I’m not really working somewhere where I can affect global change, I don’t work anywhere innovative, nor at a start-up and I don’t really have an impressive job title. I made it to the second last round before being knocked out. After meeting all the other applicants I was like, yeah, this isn’t happening, but was pretty chuffed to have made it that far.

I made a head start on renovating my house. The garden was overgrown to the point that if I’d chucked on a safari suit and posed for a photo it could have been confused with someone trekking the Amazon. All the gardens have been either cut back or ripped out and replanted. I ripped off the stupid fucking bamboo screening off all the fences, too. I don’t know what sort of idiot decided that nailing in cheap shitty bamboo screening across every single metre of fence was a good idea, but if I find them I’ll probably shove a rusty nail up their clacker. It rots in the weather, and in about 3 months it goes from nice yellow bamboo, to broken brown straw.  This stuff had been on the fence since before we bought the house and in some parts wasn’t anything more than rusted, twisted metal holding together some dry sticks. It took hours to get down and I’m damn lucky I didn’t get tetanus. I’m going to make James mow the lawn next, because I am pretty sure I dropped a few of the nails/screws holding it into the fence and I don’t want them flying into my shins. He can take one for the team since he took no part in the actual garden cleanup. 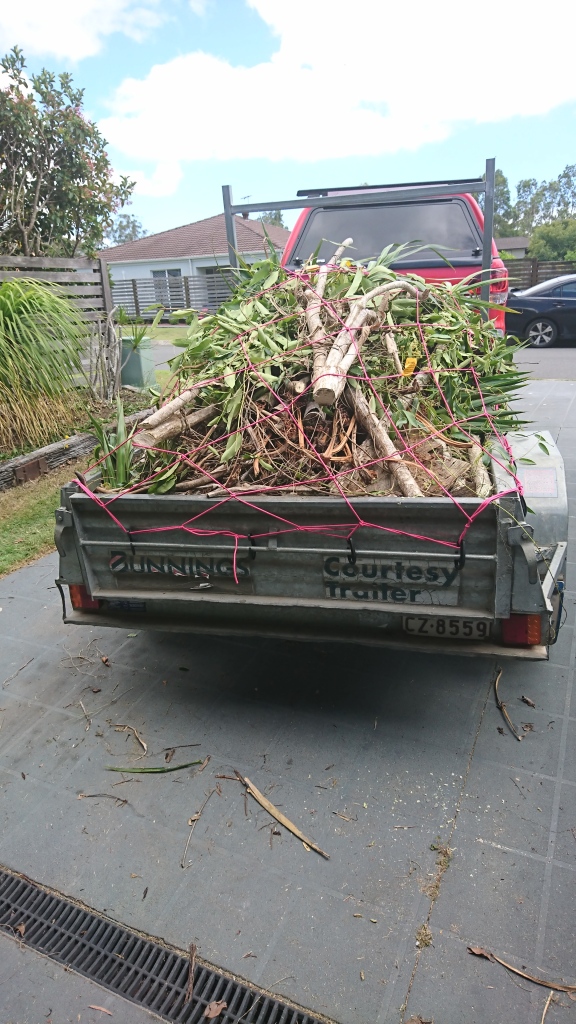 My Nana died at the beginning of the year and so my mother, who was living with Nana and being her carer, moved in with us halfway through the year. So did Nana, technically. She’s in a jar in the wardrobe (apparently that’s not a very politically correct thing to say in a work setting. I thought it was funny – she would have too). Mum just didn’t want to go back to work and decided to help us with childcare instead. It’s been good for Cailee having someone else to spend time with her since James and I are always working, and it’s great to have someone else cook dinner because I hate it and if it was just me, I probably would never eat. I never ate when I lived alone. Might have been why I was so thin. I also was too poor to fix my car so I walked everywhere. Now I have a 60km commute and sit down all day so my ass is expanding like space jelly.

I would like to get back into writing more as I’ve got the outlines for another two projects I’d like to see come to life. I did a lot of planning and diagrams and idea maps. The long commute really does give me an inordinate amount of time to think (which is both good and bad depending on my mood!).

All in all, 2018 was kind of sucky, but I did some good things and that’s what I’m choosing to focus on. Onwards and upwards.