My daughter turned 7 two days ago.  Even now, seven years later, I still sometimes have mixed emotions about her birthday (never about her, she’s awesome).

The day she was born was unequivocally the worst day(s) of my life. Instead of holding this marvelous little baby that would eventually grow up to be a sassy little skater girl who argues semantics (where does she get that from, I wonder?) and having our family around to gawk at the fact she was inexplicably blonde and cross-eyed, I was bundled off into the scary unknown without her.

If you’ve been friends with me for a while, or followed me for years (why are you still here? Although I am absolutely BURSTING with obnoxiously funny opinions and ideas, I am too exhausted after busting my ass at my respective workplaces to do much beyond zombie out in front of the TV and switch my brain firmly into the OFF position, despite every resolution to the contrary) you’ll know the events of which I am referring – Giving Birth During Cyclone Yasi (Pro tip: don’t be in disaster prone areas when you’re about to pop). Read about it.

I read it again on her birthday and with the benefit of a few extra years I realised there was so much more to that story that I’d actually left out, like the fact that Mater Mothers Hospital actually refused to give us more nappies because we’d stayed beyond the standard 3 days allowed and therefore exhausted our allocated supply.  So my husband, who had never set foot in Brisbane before, spent hours walking around Wooloongabba trying to find a shop that sold them (naturally, to no avail)! I still find this absolutely incredulous and had it not actually happened to me I would have told you that was the dumbest thing I’d ever heard. But luckily for my mental state my husband remembers it exactly the same, as does Penny, who I had to call in desperation who left work early to get some for us. Now that I live in Brisbane, every time I drive past I give them the finger for that piece of spiteful bureaucratic bullshit.

Anyway, this child of mine is amazing. She is smart, hilarious, generous and kind. She’s also super lazy. I once threw my hands up in the air in despair after a 3 hour argument about picking her damn toys up, “Cailee, WHY ARE YOU SO LAZY?!?!?!” I yelled. Her response? “Um, because you and daddy are lazy, and so you made me double lazy”. Sadly, she’s probably right. She’s also a master negotiator. The other day, after the same argument which we have every Saturday morning at 10am regarding her getting the cleaning chores done nice and early so we can just chill for the rest of the weekend, she actually said she would rather fold the laundry than clean her room. I stupidly agreed, and quickly realised that I had been outfoxed masterfully. I had two baskets to do which I gladly threw at her feet with a bunch of coathangers and told her to have at it. Then I walked to the opposite end of the house, saw her bedroom and died a little inside. Little shit had emptied every single toybox and shelf and piled everything into the middle of the room “so you can sort it properly”. She’d even pushed out everything she’d been hiding under the bed for me. The little cow had completely capitalised on my utter hatred of laundry to trick me into doing her dirty work. True to her word though, she did fold the laundry and I did clean her room, although I can’t say that many of those annoying little Kinder Surprise toys survived mwahaha.

No doubt planning her next coup

She’s just started Grade 2. She’s on the soccer team, the swimming team and takes piano lessons (naturally she never practices because, LAZY, but she skates on through by sheer arse and innate talent). Last year, I received a notice that no self respecting mother who leaves behind a school legacy of skipping every math class for an entire semester, faking elaborate injuries to get out of sports events, fabricating entire assignments complete with references and gross reenactments of Aztec sacrifice and still walking away with an A- (pre-internet days, guys- no way to fact check me easily) and drawing mean comics about teachers, wants to hear… she auditioned for… and was accepted… ONTO THE CHEERLEADING TEAM. AHHHH! I am kind of disgusted that this child of mine seems to be full of pep and spirit, but I figure she will eventually turn into the jaded cynics her parents are without our intervention. If not, well, I guess that’s life isn’t it? I don’t think I emulate my parents much at times, although after yelling at Cailee to turn off her fan as she was getting ready to leave for school the other morning, the realisation of what I said did make me clutch my chest dramatically and fall against a wall exclaiming “Fuck me, I turned into my dad.” 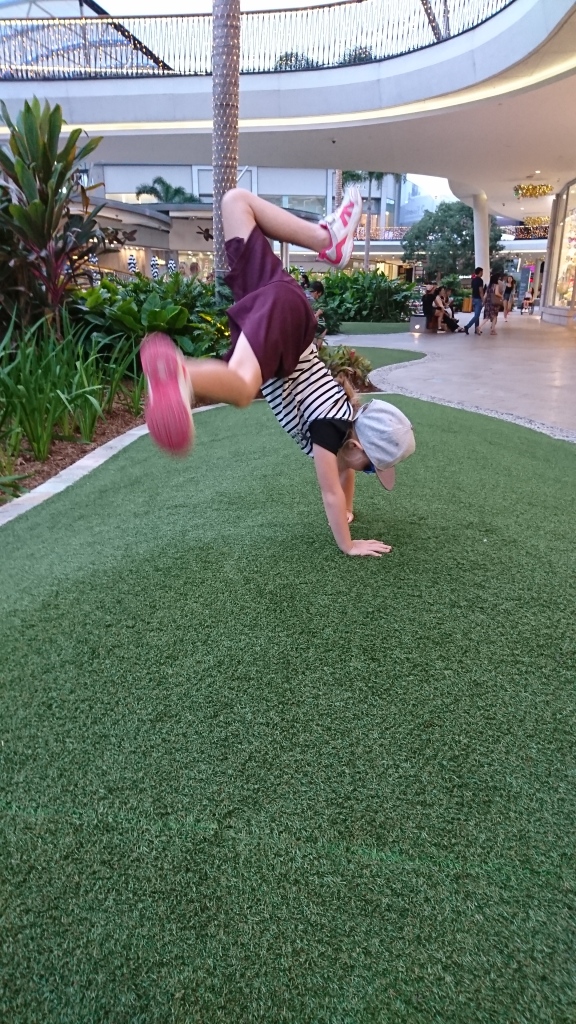 She wants to be a vet when she grows up so that she can rescue animals. She’s extremely unimpressed with the fact that most organisations and shelters won’t let her volunteer because of her age (most places are 16+). She weirdly also has a habit of tying hair ties, ribbons and on occasion my sewing tape measure around the necks of her stuffed animal toys and stringing them together like some weird Stuffed Animal Centipede so maybe it’s a good thing. She can tell you the difference between just about every single dinosaur that was ever in existence. I once said something about a pterodactyl and she gave me a look that could wither the most unwitherable. “Mummy. That’s a pteranodon, a pterodactyl is a family of dinosaurs, stupid”.

Long story short – the way she came into this world was indescribably shit. I did a reasonably coherent job of attempting to capture the shit and now it seems like a bad dream that happened to someone else. Except when it’s her birthday and I get reminded. But she’s rad. And I love her. And I wouldn’t have it any other way.

She loves her mummy, too (luckily!)