It’s an unwritten rule that you’re not supposed to say shit like, “Well what the fuck else could go wrong?” when you’re having a day that stinks like a rotten armpit. You might think it, but you’ll never ever actually say it because the subsequent shit storm that will rain down on you will turn you into Biff from Back to the Future 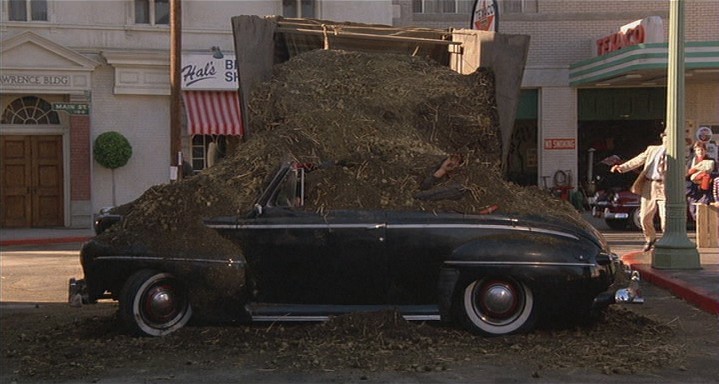 It turns out that whatever little bastard is monitoring your verbal frequencies hasn’t been making his/her daily quota of ironic groin kicks and they’ve moved into the business of harvesting your thoughts to inflict their horrors. Oh yes, you may laugh, but as a victim of this latest scam, it is my intent to forewarn you so that when you find yourself on the verge of making the catastrophic mistake of rationalising epically awful times you don’t accidentally give the buggers the means by which to blow up your diminishing will to live.

You may recall that in February I was on the verge of a nervous breakdown and was mainlining revenge movies as a moderately sensible alternative to drinking Australia’s wineries dry. Hah. My worst fears have been realised. I am now a 32 year old adult (ok, person, I still reject the adult status) who lives with her father. That’s not actually the bad part. My dad is pretty awesome, his TV is bigger than mine, he’s never home and when he is, he does my washing. This I consider a win because this is what my laundry used to look like:

Take one look and think, fuck it, I got better things to do. Housewife of the year!

Now of course my laundry is all sparkly because I no longer live there. It’s on the market to be rented, but so far people seem to just apply for it and then decide they’d rather live somewhere else, as though the bad juju of 2015 is haunting the place, scaring prospective tenants off like a marauding ghost. So I still have to pay for the damn thing which sucks, but I’m saving money by eating all of dad’s food. Instead of buying half the produce aisle with good intentions and coming home after a rough shift and throwing myself on the couch like a petulant teenager and demanding KFC and having all the food eventually go feral in the fridge before I have the energy to actually cook it, I no longer get a choice. Much to my continued amusement, my father doesn’t eat crap. His pantry is stocked with things like spices and flours and he makes pasta from zucchini. Which actually isn’t horrible, believe it or not. And if he doesn’t cook, he makes my brother do it for him because Duncan is the house-elf, although he will do well to remember that house-elves should not thunder through the house at 3am keeping shiftworkers awake or try and discipline the children of his siblings when they’re in the middle of doing it already. I’ll give him a sock alright, and it’ll be a sweaty one I’ve worn after a double shift that reeks of blood and poo.

No, the crux of this post is that I have been keeping that “nothing else could possibly go wrong” thought at the back of my mind, while I grin and bear my way through life the past two weeks. I have had some truly horrendous shifts at work, including unexpected deaths that shook me. All my belongings are in storage. My daughter won’t sleep. I got my second ever speeding ticket which is ridiculous because I drive like a nana (unless it’s the road to Mossman in which case all bets are off and I’m probably late for work) and it was on the edge of a 60 into 80 zone and I was doing 65. I just had to spend many many dollars fixing up my husband’s stupid but sexy car because all the shit broke in it and he hadn’t had it serviced in about as many years as it cost to fix (hint: biblical figures). Then I had to replace the motherflipping tyres on it. I got shafted by a zillion other bills. I keep getting mail and crying wondering how I am going to pay for it all. Then James drops the bombshell that the gearbox blew this morning.

But it’s ok. Because overtime, even though it is killing my soul. And James can drive MY car to Brisbane next week to go job hunting. And I say this to mum and dad as I left for work tonight. We actually discussed the fact that our stupid expensive sports car has cost me more money than it’s purchase price to keep running (we bought it when we were rich and own it outright). And that my moderately priced less obnoxious car has required $140 in repairs in the last 6 years.

Then this happened, the second I turned into the work carpark.

Lucky for me, James decided to play Knight in Shining Armour after I rang him to complain about how I neither wanted to catch a bus home after a night shift or leave my car in $4 an hour parking during the day (free overnight at least). So he heroically abandoned our whinging child to the care my dad and the house-elf and came to the hospital to fix it. Except he’s never changed a tire in his life and he had to get a random person to help him stick the spare on (at least I had a spare, his dumb piece of shit doesn’t). He got to learn something, be a useful engine and I get to drive home. With any luck, I won’t encounter his bitch sister sauntering down the main street like an overripe Nicole Ritchie like I did yesterday, because I can only control my !HULKSMASH! for that woman for a limited time now that I am not consistently exposed to her evil every day.
I can’t believe I resisted the urge to turn her into a hood ornament and this is the damn price I have to pay! Unfair, guys. Unfair.

My Tweets
Join 176 other subscribers