Good morning to you all. I trust your New Years Eve celebrations didn’t land you in any kind of hot water or jail and you are now lying back in your bed thinking about your throbbing headache, making plans to never drink again or wondering just what the hell happened. You are too exhausted to get out of bed and are thus lazing about reading on your phone because it makes you feel like you are awake and doing something, when we all know you’re really just pretending and keep nodding off, only to be startled awake by the phone hitting you on the face (an amazing downside of switching to a Galaxy S4 from an iPhone I have discovered).

I asked my daughter what she wanted to do last night. She picked watching movies and blow me over dead if she didn’t decide that pirates were the theme du jour. I love this kid. Pirates in general are one of my biggest obsessions so I was absolutely delighted with the fact that she wanted to spend all night doing that. Ordinarily she has the attention span of an ADHD kid with too much sugar in their system and has a really annoying habit of forcing us to sit down and watch a movie with her, only to change it halfway through (very easy to do on our media server which is controlled by about 10 different devices).

First up was pirate classic Pirates of the Caribbean which was not the basis for my pirate obsession. I’m a hipster pirate lover, I did it WAY before it was cool. 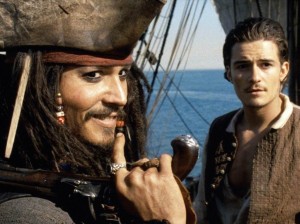 Suddenly everyone was all over pirates thanks to these two

She loved it. She called Jack the “Big Pirate” and kept saying things like “Oh nooooo! Wass gonna happen? Mummy where the big pirate go? Nooo dey gonna kill him! He’s twapped oh no!”. It was very cute.

Then came Cutthroat Island, one of my all time favourite movies. Not only does it have pirates in it, but it’s all about GIRL pirates, where Geena Davis pulls off the most awesome display of badass action chick I’ve ever seen in a film that is fundamentally NOT sexist in any way where the leading man (as it were) is basically a damsel in distress. Sadly it remains the biggest movie flop in history and the fact that Renny Harlin blew up an honest to god actual full sized ship for the ending as opposed to a scale replica is probably half the reason, the other half being the pervasive belief that women couldn’t do action.

That and it was pulled out of the cinemas after two weeks. Shameful. Sure, it’s not highly polished like Disney’s Pirates, some of the CG is laughable and the puns aren’t as sharp as they could be but it’s fun and the gender reversals of traditional strong/weak, heroic/needs rescuing characters was absolutely spot on, even down to the point where none of Geena Davis’s costumes pandered to an ogling male audience, but were authentic and practical, something that very few movies have ever managed to replicate.

I also hit the jackpot at the shops yesterday by finding the perfect pair of pants. If you’re a woman, you’ll know how rare that is. It has heaps of pockets, it fits nicely around my waist where I want my pants to sit, not up around my ears or showing off my pubes, doesn’t give me a muffin top despite fitting nicely, fits well and makes me look slimmer, allows me to move my legs in any damn direction I please without restricting my movements, finishes perfectly above the knee without making my short legs look stumpy and is just super amazingly wonderfully comfortable. As in, I literally spent all night last night wearing them and had I had more than one bottle of wine it was entirely possible I might have written a love poem to them.

Now, I bet all the women are hungering for the secret.  Ladies, there is no secret except that fashion is not your friend. I know my waist and arse size, it’s a side effect of having lost almost 30kg in that I am constantly measuring to make sure I’m not getting fatter when the scales don’t reflect what I think they should be. I picked up two pairs of ladies pants to try on that according to the tag should fit. I couldn’t even get them over my butt, let alone do up. So what did I do? Went straight to the mens section, picked a pair of pants that were sized similar to my waist size (why are womens clothes not sized this way? It would be HEAPS easier to identify your correct size and save so much stress!) put them on and done. Perfect pair of pants. Why walk around squeezed into some godawful uncomfortable thing with all your wobbly bits on display because it’s fashionable? And with no pockets. Womens clothes never have pockets. Fuck fashion. 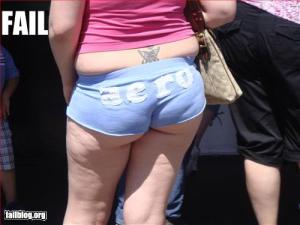 Just because it’s in fashion, doesn’t mean it’s for you.