I’ve been reading quite a lot of “girly” fiction the last few days and I have come to the conclusion that the heroines are all daft and terrible people.

I’ve mostly been reading the humourous mystery genre, you know, the bumbling female detective kind, and I’m getting a little fed up with chicks who are absolutely powerless against a guys good looks. Seriously, put your tongues back in your mouths, and get on with life! These silly women are rendered utterly powerless by the sight of a tight bottom in jeans or are getting bowled over by a whisper and a whiff of cologne! Please, grow some balls. You are starting to insult me.

Ok, I somewhat understand that you need to have an attractive oppositional figure, it’s a standard literary device, but does he have to be all Captain America-like all the time? Chiselled good looks, perfect hair, tight jeans and totally convinced of doing the right thing all the time (except breaking the rules when it comes to the bumbling chick)? But I hate Captain America and I’m also not attracted to blonde men, with the exception of Chris Hemsworth as Thor. Not as Chris Hemsworth, just Thor. But why does the chick have to get all stupid as soon as the guy enters the picture? Previously, she may have been tracking down baddies, being headstrong and independent, enter some testosterone and she turns into a wilting lily. Not cool, girls.

The genre is just not filled with enough strong women though. I’ve read thousands of these types of books (well, my Kindle says about 150, but that doesn’t count what I have in my physical collection nor what I borrowed from the library) and they’re all the same. Somewhat intelligent, moderately attractive (but obsessed with her fat bum) chicks holding down good, well paying jobs, turning into sludge when Captain America gets onto the scene. Or the Latino version of Captain America, as a lot of the cop figures seem to be. Where are the maneating, strong, tough chicks that get the job done? Why do they all obsess about their bums or worry about why they’re attracted to said dude? Can we get through a scene between a man and a woman without her alluding to how desirable some part of his body is? Can’t she say “Yeah, this dude was super hot, like Khal Drogo hot, but he was as dumb as a box of bricks and super possessive – total turn off!” and then go and get drunk with her girl mates and not all mope about being single?

And let’s talk a bit about an oppositional figure for a minute – usually, the guy comes on the scene and he and the chick don’t get along for whatever reason. But they’re both like super attractive, or the guy is and the girl spends the rest of the book obsessing about her wobbly bits and why he might have looked at her that way and then the whole relationship turns into a will-they/won’t they in about three pages. What happened to the hating each other? Maybe it’s just wish fulfilment on my part, but I really wish I could see a proper oppositional relationship in a book like this – two people with truly opposing objectives and perspectives who bitch, snipe, are hilariously sarcastically mean to each other and since it’s fiction they’ll probably bone at some point but then be super awkward and not fall into the usual boyfriend/girlfriend trap and go back to disliking each other. 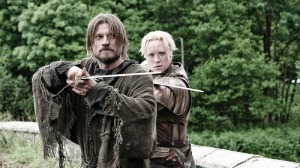 Now, THIS, is what I’m talking about. Yes, it always comes back to Game of Thrones or Stargate with me.

You know what I’m attracted to, more so than rippling biceps and washboard abs? (I bet nobody ever really used them as a washboard, disappointingly) Intellect and acerbic wit. A dude that’s smart, witty and likely a snarky mean bitch to a character is way more interesting to me than how his figure hugging jeans make a girl get hungry for some sex. That’s just terrible characterisation. A lot of these guys are dicks, both for the fact that they’re purely two-dimensional man-candy and they have a jerky personality. That sounds contradictory to what I just said about liking snarky mean bitch characters, but there’s a difference between someone being snarky and being a total douchebag that feminists would like to squish under their boots for being a patronising jerkwad.

Proving my point, with Game of Thrones, yet again.

So writers of the genre – can we smarten up the chicks and get some proper oppositional relationships happening? Otherwise you’re going to force me to write it and I’ve got no time at the moment.

6 thoughts on “The Problem With Women (In Books)”