I like to describe myself as a ‘jack of all trades, master of none’. I’m good at lots of different things, but I’m not truly exceptional at most of them. One thing that I am most definitely not exceptional at is running. As a teenager I actively avoided all forms of running, especially the mandatory cross-country runs. I would pretend to faint, fake injuries with some stolen bandages and red food dye, paint bruises on myself with watercolor pencils and pretend to limp or complain about excessive menstrual issues in graphic detail to male PE teachers. Then, when the teachers started getting wise to my mysterious ailments and their recurring theme, I just stopped turning up altogether. I did not enjoy running and nor did I enjoy the barely visible trails through snake infested mountainous terrain – the combination of the two was too unbearable to contemplate.

Fast forward approximately 15 years and you’ll find that I actually do run now, although I barely enjoy it. When I’m done I look like an asthmatic tomato thats been dunked in saltwater. Truly not the most attractive of looks, and a very uncomfortable sport to participate in – especially when you live in the tropics with near constant 90%+ humidity.

This weekend just passed, in a fit of craziness, I decided to participate in the Glasshouse 100, a massive endurance race through the Glasshouse Mountains in Southern Queensland. I say massive because the event is literally, massive. There are five events, 10km, 30km, 50km, 100km and a whopping 100 miles/160km! 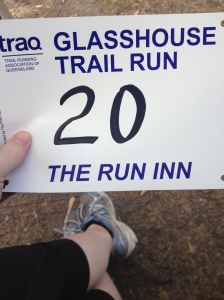 In a fortuitous coincidence, 20 is also my BMX racing number.

I had decided to compete in the 10km event earlier this year. I was doing fantastically well with my training until disaster struck in the form of a fractured heel. I spent six weeks with my foot in a boot, not doing any form of exercise for fear of complicating it further, and then I only had a few weeks after it came off before the event, but unfortunately it never healed properly. I had every intention of flying down for the event anyway as my clearly insane father was competing in the 100 mile event and I had offered to crew for him. Waking up at 4am the day of the race, I still hadn’t decided whether I would actually compete or not. After dropping dad and his running partner off and not having a great deal else to do since I left my Kindle at home, I decided to do it anyway.

All of my training has always been on the flats around where I live. I knew what my best 5km race time was on the flat so I decided that if I could double that and stay within 5-10 minutes because of the mountains I’d be running up, I’d be happy. I truly wasn’t expecting to actually do this given the still broken foot and the massive hills, but I managed to finish in the EXACT time I specified would be my “ideal, but totally unachievable” time.

Totally knackered at the finish, very happy, and for some reason, less tomato-like than usual

As I was running through the trails, most of which were either A) uphill, B) nothing but masses of loose rocks, C) destroyed by 4WDs, trailbikes and rain or D) a combination of all of these, I began to think about what it would actually mean to have to run these trails overnight. This is not the first time my dad has run overnight; he’s done the Glasshouse trails before (albeit at the much smaller distance of 80km) and done the North Face 100,  and while I knew that he’d be running for at least 24 hours, I’d never really thought about the actual physical and mental endurance it would take to run for that long over such precarious terrain. In the dark. There were some parts of the track that I ran (which was also part of the track he ran) that I could barely put a foot right and I was running in the daylight.

By the time I got to the top of the first mountain trail, I’d lost the people in front of me and the people behind me were so far behind me I honestly thought I was the last runner (I wasn’t, not by a long shot as it turns out). Then I realised I was alone, running through the mountains, with nobody in sight were I to have an accident if I misplaced my foot and broke it again. As it turns out, there were only minutes separating me from the groups both in front of and behind me. But in the 100km/100mile races, there is sometimes hours between runners – the first to cross the line for 100 miles did it in 16 hours and the last did it in nearly 30 hours. And as they run in the dark, the potential for injury and getting lost is hugely magnified. I had trouble identifying the correct route a few times, I’d be totally screwed in the dark.
Pretty much the only thought that was going through my head as I was running was “How in the absolute HELL, can someone honestly run this terrain for 160km?” and then “Shit, my dad is so going to die”. Not that I thought he actually would die, because I knew he was able to run 100km OK, but because for the first time I realised how truly dangerous and stupid what he was attempting was. I met him at only one checkpoint, not the many I’d decided I would because I got lost so many times trying to find them. It’s really hard trying to find checkpoints in the middle of the bush when your written directions are barely understandable and your GPS decides to take you a completely different route and gets you double lost down a road you’re not supposed to be on, that you can’t turn around on. So while I was dying of exhaustion from my own Herculean efforts (although obviously, not in comparison to his, but for me it was damn impressive, thank you very much), I couldn’t get a good night’s sleep as I was worried.

In the morning I had a heart attack as I was informed they’d completed the course in 18 hours and were nowhere to be found. Considering the last 100km marathon he did was finished in 22 hours, I sincerely doubted that he’d managed to add an extra 60km and shave off four hours at the same time. He hadn’t called me and everyone insisted that their paperwork was correct. It wasn’t. He wasn’t answering his phone and I scared the shit out of my mum back home when I asked if he’d called her. Hey, it’s a totally logical thought, if he was delirious or crazy from heatstroke and some random found him, it was more likely they were going to call his “HOME” number than work out that some random in his phone who doesn’t even share the same surname was just on the other side of the hill. I eventually managed to find someone who knew him and his running partner (“Oh, the older dude who looks like a tomato wearing the bright orange with all the piercings who never stops talking and is running with that skinny lady who also never stops talking?”) who assured me that they most certainly had not finished and weren’t expected back for a few more hours.

They finished! And they now hold the record for the slowest completion time within the official time limits. But you know what? They finished, and there was a good 30% or more who DNF (did not finish). I learned this weekend that my father is an absolute machine who clearly has mental and physical fortitude tougher than any substance known to man. I cannot comprehend what it would take to run for 29 hours and 59 minutes. I can’t even stay awake that long, let alone run continuously for that long. So I took great pleasure in announcing to the entire world for the rest of that afternoon what he’d managed to accomplish. Because it is nothing short of truly bloody amazing. And oh look, I’m doing it again. Everyone please tell my father what a great job he’s done. 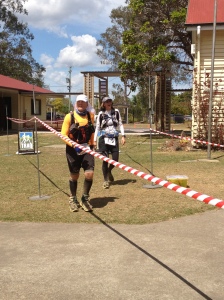 This man, is what we like to call cray-cray. But seriously, how awesome is he?

…FYI, he’s sworn to NEVER EVER do that again 😉

One thought on “The Upper Limits of Human Endurance”

My Tweets
Join 176 other followers