I have finally managed to do a Friday Fumbling! Granted, it is on a Saturday but I told you I would make an effort. 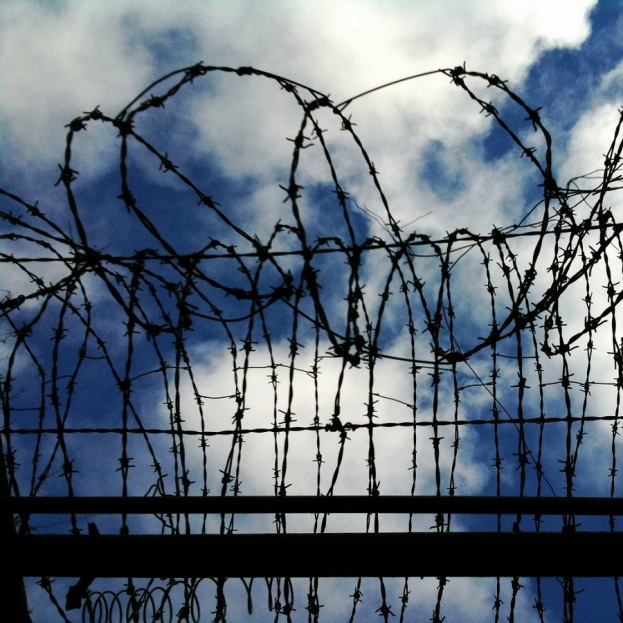 The young girl wrinkled her nose and grimaced as they drew closer to the outskirts of the city. They smelled wrong and nobody ever smiled. They were awful places. She caught a whiff of bread baking somewhere and relaxed for a moment, thinking that maybe this time it wouldn’t be so bad. Ten steps closer and the delicious bakery smell was replaced by the unmistakable stench of smoke, rotting rubbish and human waste. She wished more bombs would come and destroy what was left of them.

She gagged and her father placed his strong hand on her shoulder, a warning to be silent and not draw any attention. She straightened up and rubbed her eyes to stop them watering. She knew what happened to their kind of people when the lawkeepers noticed them. At best she could hope to be robbed, beaten and dumped in a ditch or a jail. At the worst… well she’d seen what happened to Jen. It had haunted her dreams for years until she was old enough to understand it. Then her fear had turned to disgust and hate for these vile city dwellers and their whole evil society.

“What are we doing here?” she asked quietly.
Her father frowned, giant furrows creasing his weather beaten face. “This one’s a bit more complex than usual. Are you sure you don’t want to go back? They haven’t seen you yet, it might be safer”.
She grew concerned. “Father, no. I have to do these things as much as you do. More than you do, since I don’t have any other choices”.
“Fine. There is a man here who wants to get some information to the magistrate in Adelaide about the mines…”
“Why can’t he do that himself? Lazy city jerk!”.
“It’s more difficult than that. He can’t get the information from here to there without it being scanned by the lawkeepers and if they knew what this information was… well, it wouldn’t be pretty if they ever caught him”.
Her eyes grew in excitement and she grinned from ear to ear. “Is he a rebel? Is there going to be a rebel uprising?”
“Haidee! Shush! I know you hate them but if anyone even heard you say that, let alone look that damn happy about it, they’d string you up in city square and torture you to death publicly”.
She sobered up instantly, thinking of Jen and the blood that had coated every memory of her.
“Well if I get to stick it to some city pigs, there’s no stopping me” she declared and marched onwards, determined to have some form of revenge.

“Stop!” he yelled after her, leaving no room in his tone for negotiation. He grabbed her arm and clamped a metal ID bracelet onto her wrist. “You are most definitely not coming in with me. You will wait nearby and wait for me to finish. This is too dangerous”. He shook his head. “I was an idiot to bring you with me”.

They continued on through the city in silence, Haidee simmering with rage and her father tense. She mentally scolded herself about learning to keep her mouth shut. Her father had yelled at her often enough about it. “It’s a fine thing to have a voice and an opinion out here in the wilds where nobody can hear you. But out in the cities it’s a whole ‘nother story. People there don’t have the kind of freedom that we do and people who don’t follow the rules no matter the cost, well they get beat down, and beat down hard. The lawmakers can’t afford dissent and the lawkeepers can be vicious unless you’ve got the coin to bribe them to be lenient”.

They stopped by the side of a park. “Haidee. Wait here. Something’s different”. Her father walked off, making every effort to blend in while scanning the crowds. She watched him walk to the grocer’s stall and haggle over apples and wander through the other stalls in the marketplace before disappearing from her sight. She sat down on the grass under a giant elm tree, one of the only trees in the area. “No wonder they made this the park” she thought to herself. She reached into her satchel and drew out some paper and her pencils and began to draw, her safeguard. In the cities only the rich kids could afford paper and pencils so anyone that was looking for an outside girl wouldn’t give her a second glance. It had always worked so far.

She scribbled absentmindedly, drawing faces in the crowd and watching for anything out of the ordinary. Her father had said something was different. She had never been to this place before so she didn;t notice that anything was different but something had spooked him and she knew he didn’t scare easily. What was it?

A murmur had begun to ripple through the marketplace and a crowd gather on the far side. She resisted the urge to go over and see what was going on, but craned her neck trying to maintain a curious but ultimately disinterested facade. It was much harder than it looked. Her heart was pounding and her hands began to sweat, destroying the smooth, clean lines on the page.

“Royce Pullen is dead!” she heard someone say and wondered whether or not that was the man her father was going to meet.
“A walker!” she heard someone else say and her heart sank.
She watched in terror as the crowd parted to let through two uniformed lawkeepers dragging a slumped over man between them. A man wearing pants she had stitched herself. She bit her bottom lip hard and dug her nails into her arms to resist the urge to cry out at the sight of the blood dripping from a gash in her father’s face. He didn’t raise his head as he was dragged past but his hands flicked, motioning her to run.

She screamed silently, frozen in place as she watched her father get dragged away. She knew what awaited him. She began to cry.
“Hey girlie, don’t be scared”. She looked up and saw a lawkeeper making their way over to her. Her fear deepened. She tried to make herself sound as small and innocent as she could. “I didn’t mean to be, it’s just, well I’ve never seen blood before, it was a shock”.
“Well I expect it would be miss. But we’re here to keep you safe you know. Can’t have walkers like that around, they cause all sorts of mischief, always stealing and telling lies.You better get on out of here though, this ain’t gonna be the sort of place a young lady should be soon enough”.
She stifled her fear and her rage as the lawkeeper ushered her out of the park and past the marketplace. Once he turned to leave she ran as fast as she could until she was beyond the sight of the city gates.

She sank to her knees beside the road and emptied her stomach in between heaving with sobs. The bastard city people had gotten him. They had destroyed everything she had ever loved and she wanted to rip them apart with her bare hands. But she couldn’t do anything. She was too small and didn’t know anything beyond that they owed her a father. She smiled as an idea formed in the back of her mind. She knew where she could start…

I have been thinking about dystopian societies a lot recently, in no small part due to listening to Iced Earth’s album Dystopia on repeat ever since I saw them play live two weeks ago (wow, by the way). I’d really like to write a story about a dystopian Australia, but for now, this will do.