I’m sure we’ve all seen someone with a tattoo wandering around at some point. Some people are plastered in them, some have only a few and sometimes the most surprising people will admit to having ink.

I’m of the opinion that tattoos are a great storytelling method and a gateway into a person’s inner being. Most people get a tattoo because they want to have a permanent pictographic representation of something that means a great deal to them. I say most, because I do know a few people who get them done because they think they’re going to add to their badass factor. You just need to look at Ugliest Tattoos to see that.

A lot of tattoos represent something spiritual, crosses for belief in God and salvation, doves for hope and peace, hearts and roses for love. Those are just the easy ones. Ask most people about their tattoos and their answers may surprise you; most probably will have a story behind them. There are memorial tattoos, championship tattoos, motto tattoos, band tattoos, pretty much everything imaginable that could be important to a person or represent a significant event or person in their life.

I can’t speak for all tattooed people of course. I’m only speaking on behalf of myself and the people I know, but all of mine have great personal significance to me (as do my friends’  but I’m not discussing theirs without permission!).

For instance, I have this tattooed on my back: 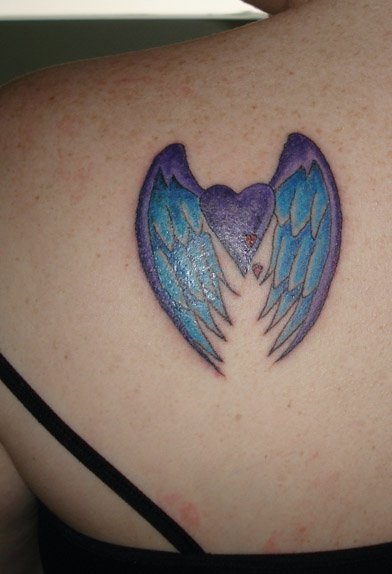 This is one that I drew myself, so it’s special to me for that as well, but I had this done not long after I lost my first child. The little heart outside is to show that a piece of mine is missing. The angel wings are pretty self explanatory.

I also have this: 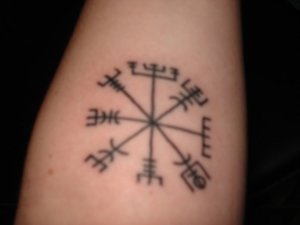 That’s a Vegvisir, which is a Viking ‘magical’ sigil from Iceland which is supposed to help find your way through rough weather. I have been in love with pirate and Viking history and lore since I was a little girl, so this represents that. Secondly, my husband’s family is supposedly descended from Vikings, so it also represents him. Thirdly, I took the meaning of finding your way through rough weather to not necessarily be literal, so it becomes more of ‘in rough times’, of which there’d been a few at the time I had it done. I have it on my inner left forearm, which sounds like it’d be in-your-face-obvious, but I’d had it for over two years before one of my friends even noticed. Nobody at work noticed for over a year either.

I have others, but for the purpose of illustrating my point that I believe tattoos to be personal storytelling devices, these two will suffice. Now I can’t look at anyone else’s without wondering what the story behind theirs is. I don’t exactly go up to random strangers and ask, but I do wonder and sometimes make up stories in my head.

4 thoughts on “Tattoos and Storytelling: My take”